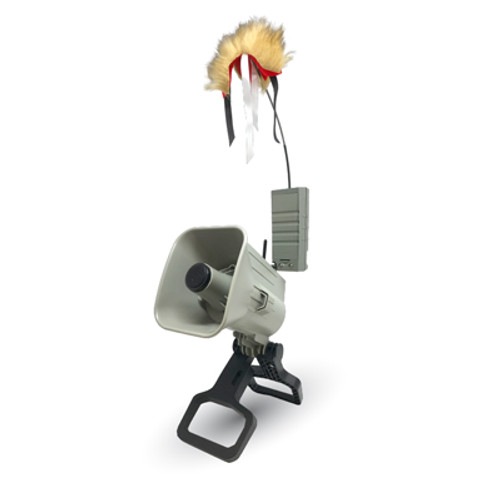 IMPORTANT NOTE that you are purchasing only the decoy. Some product images shown with the Game Call which is used only for reference of how the decoy mounts to the X-Series Game Calls.

The X-Decoy from FOXPRO turns your X-Series game call into an all-inclusive and portable predator-calling machine. Attach the decoy to the top of your X-Series call (must use as a stand-alone if using with XWAVE) and connect the decoy to the call by using the supplied Aux cable or wireless IR port connection (IR only available in later X-Series call models). The X-Decoy may also be used along with any other FOXPRO call (that has an aux jack) as a separate stand-alone decoy. Simply screw the included stake into the bottom of the decoy body and connect the decoy to your FOXPRO unit via the included Aux cord and Aux Jacks. The X-Decoy gives predators the visual confirmation they're looking for and listening for! It comes standard with a removable stake, Fuzzy Wuzzy topper, XHD speaker mounting hinge, and included hex wrench for assembly, stowed in the battery compartment. This decoy has a whisper quiet motor and Jacked Up Chaotic Motion for great action and realism. The X-Decoy has a 3 position switch that features 2 speed selectable motion (Off, High Speed, and Slow Speed) and is powered by 4AA batteries (not included). The X-Decoy is backed by a 1 year manufacturer limited warranty and FOXPRO's unmatched customer support and is proudly made in the USA.

FOXPRO FOXJack 3 Predator Decoy for SHOCKWAVE and XWAVE Only FJ3
$79.95
Add to Cart

Andrew Lewand Bring on the Night - A guide to nighttime predator calling
$12.95
Add to Cart